They don’t have to wait for the future, or to be older or to be more eloquent. 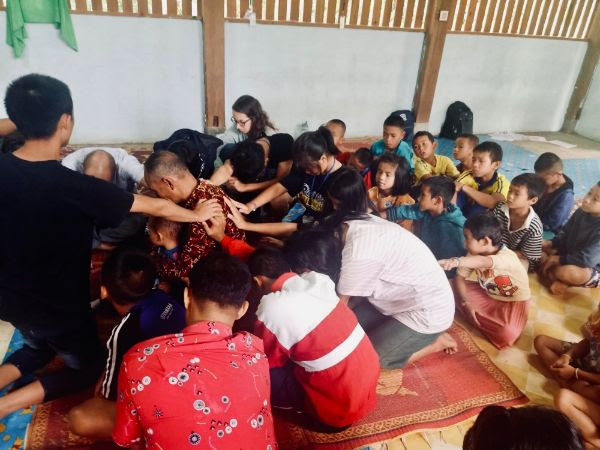 After attending the Youth Leadership Academy in December of 2018, our Thai student leaders have spent the better part of 8 months planning and preparing for an outreach project/camp in one of the students’ villages.  They came up with the idea and planned the entire event themselves! Allison Duncan shares a story from the incredible event…

The rain stopped for an hour.  While one of our trucks was stuck in the mud and many of the youth were working to push it out, one of the youth, Ploy, said to me, “Come on, Al.  Let’s go tell the neighborhood about the events tonight.”

Six of us walked up the steep path to the houses at the top of the hill.  Coming across a teacher at the local school, she told us about a couple of people in homes down the path, who may be excited about what we’re doing. We followed the path she pointed out, which led us to a woman sitting with her daughter, maybe age 9 or 10.  The youth sat down with her, boldly asking if they were Christian and if they wanted to come to our show and worship God together in the evening.  The mom said that no, they weren’t Christian.  They weren’t sure about all that.  She also said how they weren’t able to come because her daughter couldn’t walk.  Dao, who is very tiny herself, playfully said, “That’s okay.  I’ll carry you.”  A laugh came out of my mouth but I looked at her, and her face was completely serious for a second.  The girl shivered and said she was cold, which may have been true, but I sensed the excitement in her bones.  Dao broke into a smile, nodding at the girl.  The gleam in her eyes told me she really would do whatever it takes to get the girl to the church.

We went on and came across another elderly man who was eating soup at the back of his house.  His neighbor told us that he couldn’t walk either, so he wouldn’t be able to come, and that he wouldn’t understand any of the Thai that we’re speaking (because he only speaks the tribal language).   As I turned to walk away, I heard Ploy boldly say, “That’s okay.  Let’s go pray for him.”  Ploy stood up and everyone followed.  As she neared the man, she spoke very clear Thai, telling him who we were, using hand signals to tell him that we were going to pray for him.  The students bravely placed their hands on his legs, crying out to God for healing.  Tears sprung up in my eyes as so many realizations came to my heart.

I am so proud of these students.  Not a lot of adults came to our activities the night before, so without anyone telling them to go, they decided on their own to go invite everyone in the neighborhood, during their free time. The path was slippery, steep and far, but their heart for these people showed as they desperately wanted everyone to come and hear how great our God is.  And even if they couldn’t walk, the kids decided they’d find a way, or they’d pray for them right then.  Because our God is greater than these things.

So as we sat, with our hands outstretched towards this man, I felt in my heart and saw with closed eyes, how they are in fact, already the leaders they strive to be.  Over the 2 or 3 years that we have known some of these students, I have seen so much growth in who they are and how much confidence they have in themselves.   They don’t have to wait for the future, or to be older or to be more eloquent.  They don’t have to wait for anything to happen.  They are leaders.  Not because of the confidence they do or don’t have, and not because of what they can do, but because of what God can do.

After praying, as we walked back towards the house we were staying in, it started to drizzle again, meaning people would surely be late.  But a couple of hours after the activities were supposed to start, people began coming.  The mom we had invited and talked to, walked in, hunched over completely.  She turned around slowly to set something down and I saw that her daughter was cradled on her back, not yet ready to let go of her mom, and maybe even a little nervous.  But here.

Afterwards, Ploy and many other youth stretched out their hands in prayers of healing for this girl.

The untainted, loving hearts of these youth give me so much hope for the future.

For what they can do in their schools.  Families.  Villages.

And not only in the future, but for what they can do and for what God is doing in them.

I am so proud of the way they handled every situation thrown at them, how their hearts were all in for the people of this village, how we didn’t have to ask them to reach out or to be inclusive.  They just did.

It is an incredible honor to be able to see who these students are becoming as they pursue Christ and begin to share Him with others.  As we follow up in the weeks ahead, I pray they would see their worth in the Father’s eyes as they grow in confidence and excitement for the future.