It always feels like once a game gets started, kids flock to it. 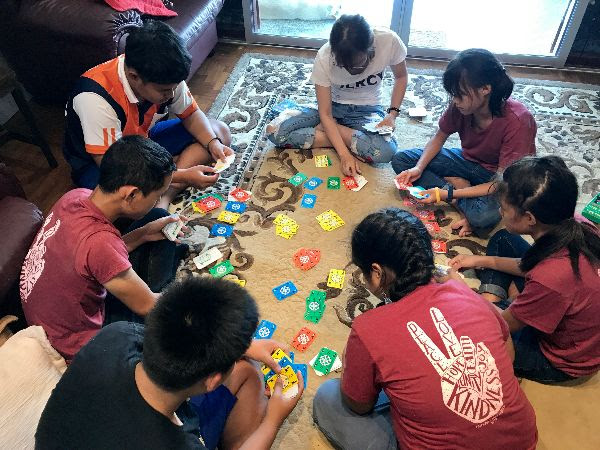 Allison Duncan, serving in Thailand, illustrates how a simple card game can sow love and belonging.

I’d never played Dutch Blitz before coming to Thailand. It’s something of a novelty. Sort of like two player Speed, stacking cards based on number, but with this game, you can play up to eight people. It always feels like once a game gets started, kids flock to it.

This past week, I was to be watching four kids at a youth home who aren’t old enough to go to another camp with a partnering organization that a lot of our staff was helping out at.

Walking into the room was a bit of a shock, as there were not four kids, but 17 kids. So goes the nature of our work here, with different languages, or different expectations and even the “no worries” mentality of Thai people, maybe assuming we can make anything work.

But honestly – it’s been one of my favorite weeks of the year so far. We thought quickly on our feet and played lots of big group games amidst some more chill indoor activities, as it happened to be 104F outside (and some of our other staff were superheroes in coming on board to help).

During lunch break, I pulled out Dutch Blitz and taught them how to play. They caught on faster than most, and soon enough, I couldn’t even win a round.

We were at this youth home for three days, and every day, before activities, during lunch break, and after activities, they asked to play cards, dragging me by the hand, insisting that I play. Apparently, the younger kids were cheating, but they don’t feel brave enough to cheat when I play.

We’ve played Dutch Blitz at so many youth homes, and so many camps and activities, but there was something about this youth home that felt really special. In between rounds, I tried to teach them how to shuffle instead of laying all the cards out and mixing them up. I began to ask them what they liked about school and their youth homes. Always wanting to play were two middle school aged twins, their names being the same, except for one ending with an E and the other with an A. They kept tricking me and at the end of the week, I still didn’t know who was who. But I think what was most special, was this distinct feeling of not feeling like an outsider. It was the first time I can remember that I could easily explain the game in Thai. I understood all their jokes about cheating and when two boys couldn’t stop laughing hysterically, neither could I, as one of them said, “P’ Al, I don’t know where my brain went.” (He couldn’t seem to ever win.)

I’m thankful for this weird, German card game that brings such fond memories, beginning with me playing at camp three years, but not understanding any Thai. Fast forward to now, as I call out a kid for cheating, blatantly pulling needed cards out of his deck. The rest of the group throws their cards down and tackles him, never without a smile.

They only take breaks for ice cream and when it gets too unbearably hot (because we have to turn the fan off while playing so it doesn’t blow the cards).

The boxes are torn and the cards are becoming sticky, but the game never changes. It’s shown me how far I’ve come and sometimes still when the devil speaks into my heart and I begin to feel like I don’t belong, a kid runs up and says, “P’Al, did you bring the cards??”